Cartagena de Indias is the capital of the department of Bolivar in Colombia. The city is strategically located at the foot of the Caribbean Sea . Since 2011, Cartagena has been recognized as the Tourist, Historical and Cultural District of Cartagena. The Colombian city was founded on June 1, 1533, by Pedro de Heredia and was declared World Heritage by UNESCO in 1984. It is considered, by many, as a city full of charm and magic, making this city one of the most visited by tourists from around the country and the world. 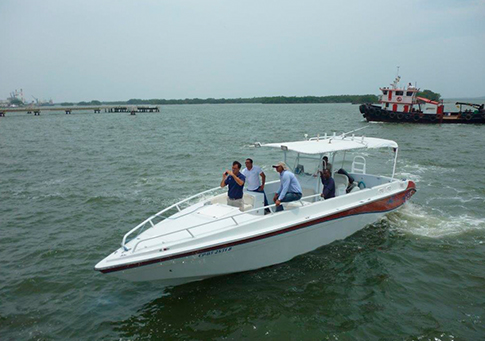 As a result of its strategic location, the city's Spanish conquerors, sought to turn the city into a major port for carrying goods into South America, slave trade, transportation of gold, plants, animals , minerals, and crafts to the old continent. Cartagena has one of the busiest port systems. Among these are important public use terminals such as the Port Society of Cartagena - Contecar , Compass (formerly El Bosque Docks ), and the Port of Mamonal. Cartagena has become a major logistics and international trans shipment port. Notwithstanding, the preceding business focus of ports, another activity exercised with great importance is tourism. The port of Cartagena receives approximately 150 cruises every year.

Cartagena is also located amongst the Nautical Caribbean corridor, comprised primarily of Aruba, Curacao, Jamaica, Costa Rica and Panama. Its is estimated that annually, around two million sailboats and yachts circulate, with and estimated increase of over 30% in the next five years (Source: Proexport).

Its bay is the largest of the North Coast of Colombia, with a length of nine miles and an average width of 4, offering excellent shelter for boats. The tips of the peninsula Castillo Grande and Manzanillo divide the bay into internal and external; numerous navigation aids exist.

Between the islands of Baru and the island of Tierrabomba, is the entrance to the bay, called Bocachica with a permissible draft of 14 meters ( 45.9 feet), in regards to such, the following observations must be taken into consideration:

Main Canal. The recommended maximum draft is 10.2 meters unrestricted. The use of this channel for ships with a draft up to 11 meters, can be done with the following restrictions: Navigation should be done with the assistance of tugs. Ships sailing should only use the center channel navigating towards the green buoys, ie, to the side where the Fort of San Fernando, for both entering and departing from the Bay.

Colonial Canal.For this channel the maximum allowable draft of 14 meters Comments: Should be especially careful in the turning point for admission to Colonial Canal (Cartagena Bay), due to a critical depth (11.1 meters) in proximity to the buoy No. 6. Same caution should be taken when departing from the same sector.

Notes: The values ??of the recommended drafts are referred to the average level of the tides of Scimitar , that is the lowest. The difference between this and the tide is on average 40 centimeters . The safety margin of drafts recommended values is 60 centimeters below the keel. The captains, commanders of ships entering or leaving the Canal should take all necessary safety measures to avoid accidents or groundings, as they are directly responsible for the results of maneuvering their unit.

Due to its geographical position, it is an intersection of many of the major sea lanes, particularly because of its proximity to the Panama Canal, most of the ports of the Caribbean and to the Gulf of Mexico. In Cartagena, a large industrial and commercial complex develops. It is also a great tourist attraction. The climate is tropical, with average temperature of 27 degrees Celsius and with moderate rainfall throughout the year.

Cartagena is a city with and average realitve humidity of 85%. Months December to March are usually breezy and with very pleasant climate.